One of the great benefits of renting a car in Iceland is the freedom of movement. While enjoying your holidays, you don't want to worry about spending too much on taxis, sticking to someone else's schedule or finding the right bus stop in a foreign city. You can go where you like, when you like, and choose only those places and things you enjoy.

When you pick up your Lava Car Rental car, you are just minutes away from amazing and beautiful places such as the tip of Reykjanes, the bridge between Europe and North America, beautiful lighthouses, cliffs, bird colonies, a village that was used for a movie set in a Hollywood movie to name a few. This would make a perfect one-day self-drive tour around Reykjanes.

We have more details on some of these locations below and if you have more time you can hike up to the highest point on Reykjanes and relax in the world-famous Blue Lagoon afterward.

Garður is a fishing village just minutes away from Lava Car Rental's main office. It may look familiar to you if you saw the popular 2013 movie The Secret Life of Walter Mitty; Garður was one of the locations used in the movie.

In Garður, you can tour one of the oldest lighthouses in Iceland – Garðaskagi Lighthouse – and watch thousands of migrating seabirds which arrive in the spring from Greenland and North America.

Garður is located in proximity to prime fishing grounds and was once the most populous village on the peninsula. Nearby Garðskagi, at the very tip of the peninsula, provides magnificent sea views and two picturesque lighthouses.

The area is known for its diverse birdlife, seals, and dolphins that sometimes swim near the shore, white sand beaches and an interesting heritage museum with a collection of old machines on display. Garður is also the hometown of the lead singers of the popular indie band Of Monsters and Men, Brynjar and Nanna. 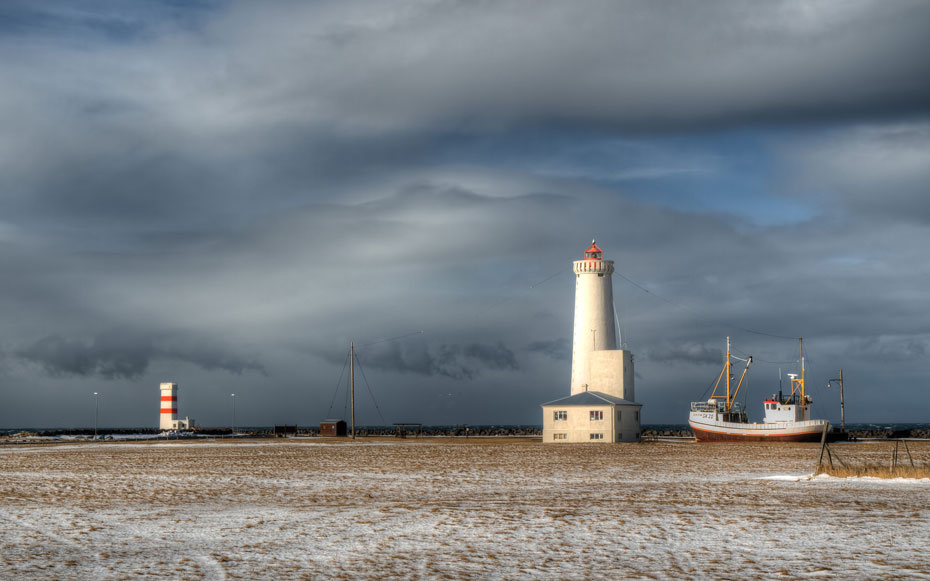 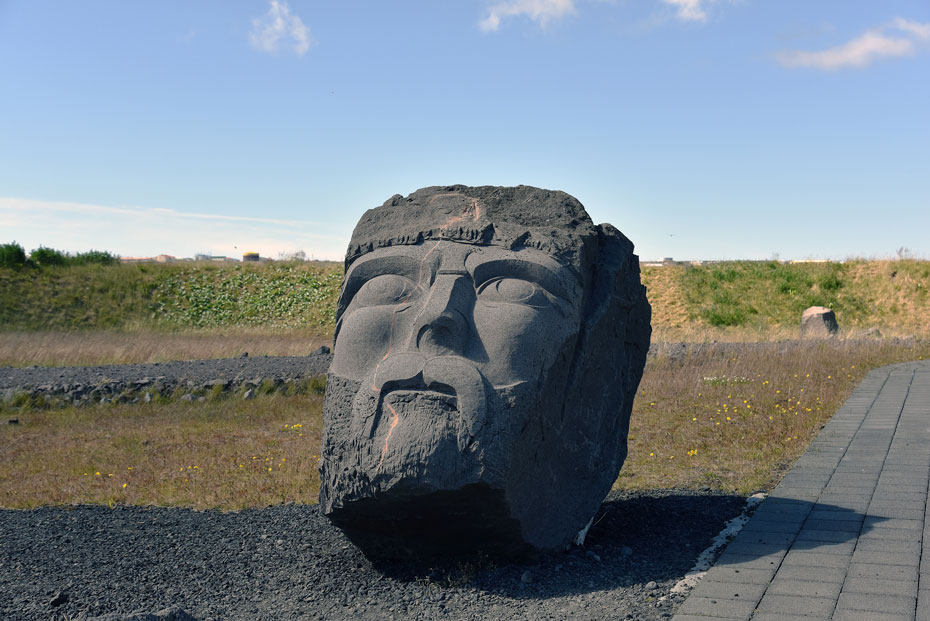 Viking World, or Víkingaheimar in Icelandic, is located by the seaside in the town of Reykjanesbær. The museum opened in 2009 and in cooperation with the Smithsonian Institution presents exhibitions connected to the Viking Age, offering a unique opportunity to learn about the history and lifestyle of the Vikings of the North Atlantic a thousand years ago.

The biggest attraction is the Viking ship Íslendingur built by the Icelandic shipbuilder Gunnar Marel Eggertsson in 1996, who used an authentic ninth-century Viking ship as a model. He focused on using the same material and construction methods as the Vikings did. Gunnar did not stop after building, ad even took the Íslendingur on a journey and sailed to New York in 2000 as a part of the millennial celebration of Leifur Eiríksson’s journey to the New World.

The Bridge Between Two Continents 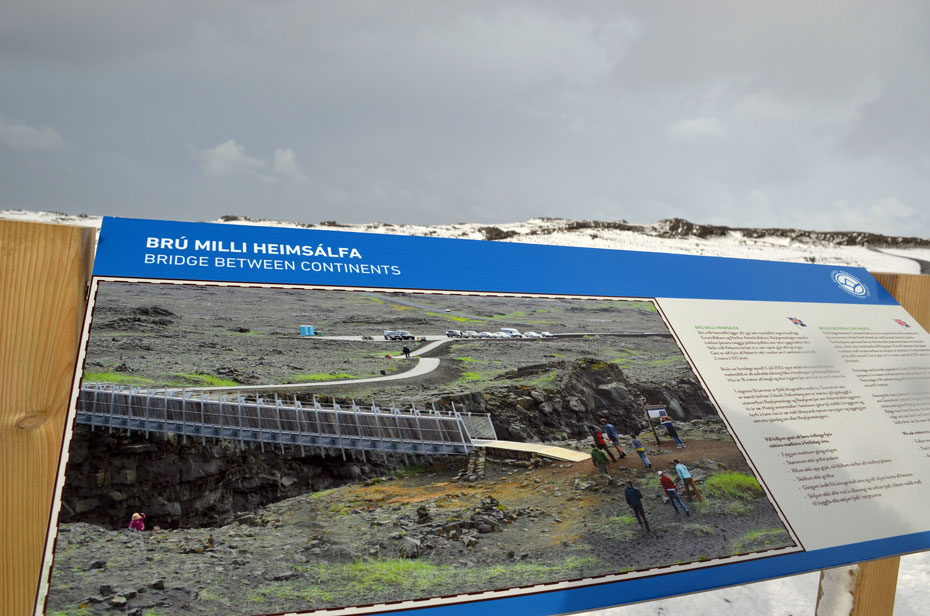 The Bridge Between Two Continents was built as a symbolic connection between Europe and North America. It’s a small footbridge at Sandvík over a major fissure which provides clear evidence of the presence of a diverging plate margin.

The lava-scarred Reykjanes peninsula lies on one of the world's major plate boundaries, the Mid-Atlantic Ridge. According to continental drift theory, the Eurasian and North American tectonic plates are continuously drifting apart due to great forces under the gaping rifts. As the plates diverge, linear fractures, known as fissures, form due to stress created by the tension that builds up as the plates move away from each other. 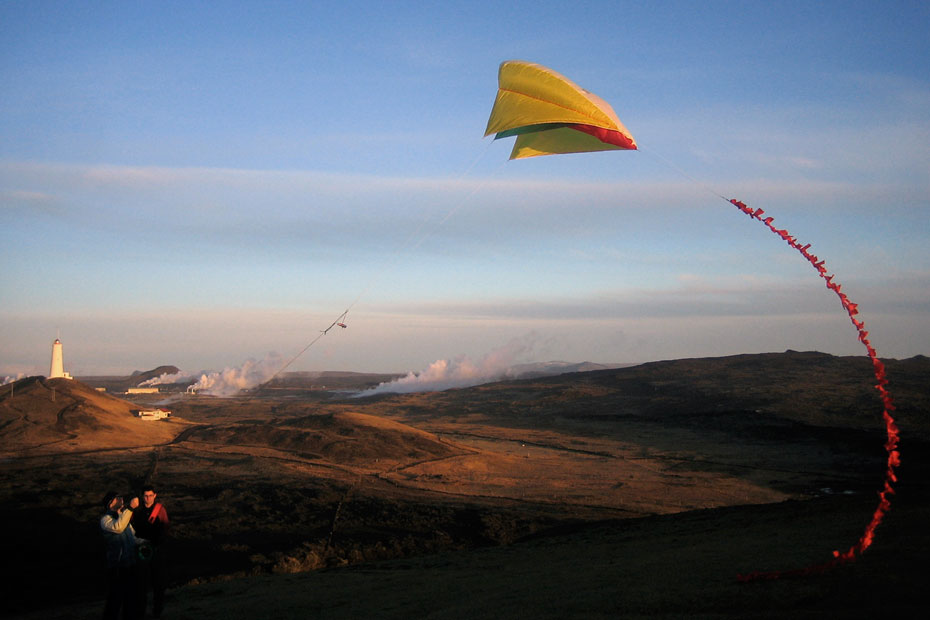 The Reykjanes lighthouse is the most popular lighthouse among Icelanders according to a 2007 survey.

The light signals from a height of 69 meters above sea level but the actual height of the lighthouse is 26 meters. It also has a radio beacon with a correction signal.

The lighthouse was designed by architect Frederik Kjørboe and engineer Thorvald Krabbe. The Reykjanes lighthouse is constructed with both carved rock and concrete. 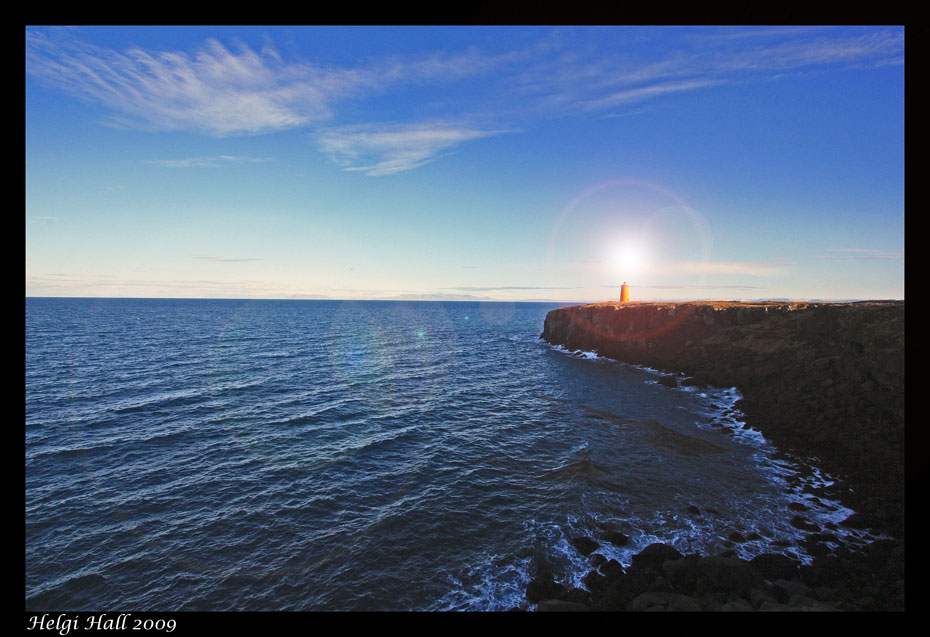 The Lighthouse at Hólmsberg was built in1956 and stands 9.3 meters (30.5 feet) tall with a compartment for the light of 3.4 meters (just over 11 feet!) tall. There are identical lighthouses in 6 other locations in Iceland, all designed by the engineer Axel Sveinsson. 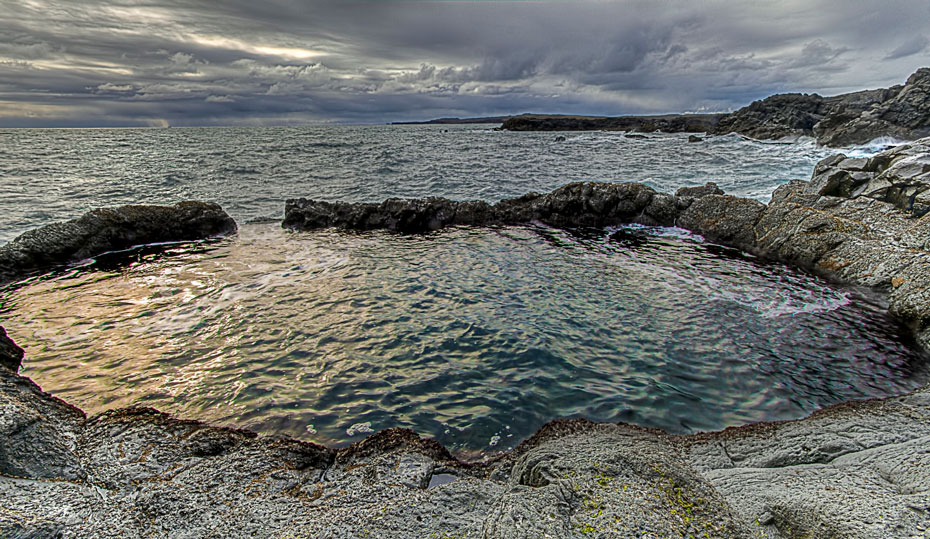 Brimketill is a small pool carved naturally by marine erosion. It lies at the lava shore edge west of the town of Grindavík and is one of the most popular natural attractions of Reykjanes. According to folklore, it was regularly occupied by a giantess (a common figure in Icelandic folklore) named Oddný, hence its old name Oddnýjarlaug. 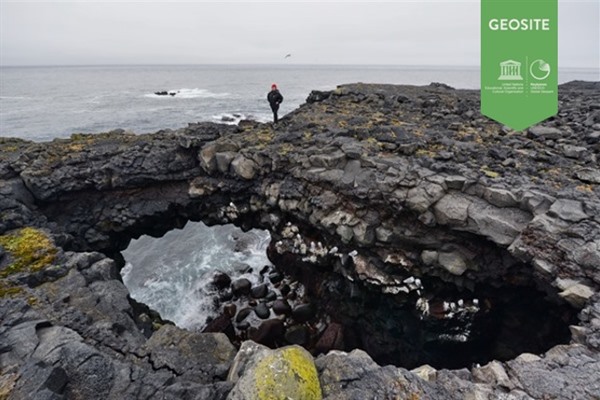 Hafnaberg is a long line of sheer sea lava cliffs south of the old fishing hamlet of Hafnir.

Hafnaberg is very popular among hikers and bird watchers, as various marine birds nest at the cliffs. A parking place is located 4 km from Hafnir on Road 44 and from there, you'll see a marked path to take you from the road to the cliffs.

Hafnaberg is a site in Reykjanes UNESCO Global Geopark. 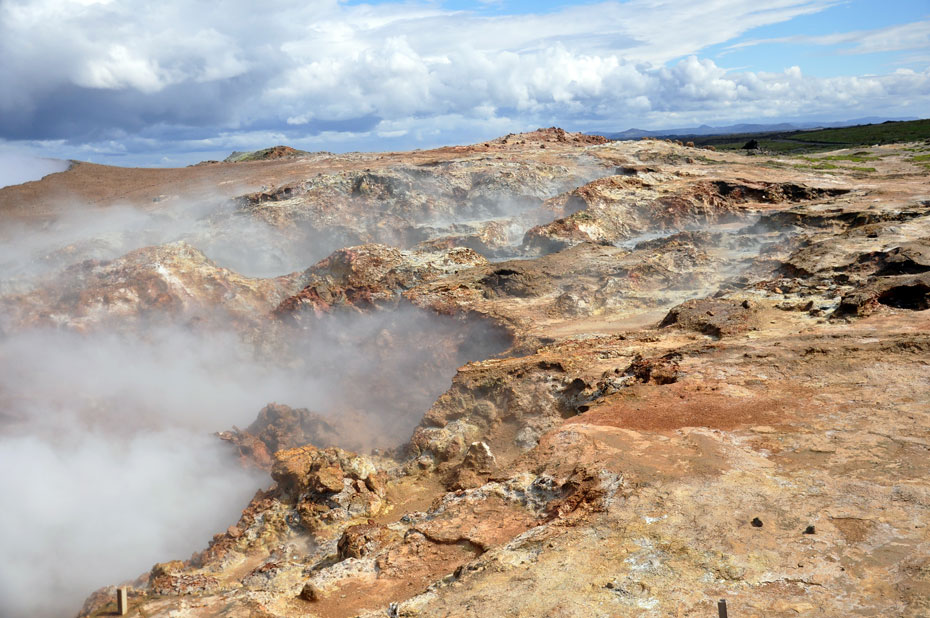 The mud pools and steam vents are collectively named Gunnuhver. The mud pools take form where steam from boiling geothermal reservoir water emanates and condenses and mixes with surface water. Accompanying gases such as carbon dioxide and hydrogen sulfide make the water acidic and dissolve the fresh lava rock into clay.

High up in the Gunnuhver group is Iceland's largest mud pool, which is 20 meters wide (60.5 feet) across the rim.

Two ramps are located at the Gunnuhver group. One is close to Gunnuhver itself where you can look down at the spring, listen to the noise, watch the bubbling water and feel the steam bursting from the ground all around you.

The other ramp is located on Kísilhól, a silica hill. From there, you have a good view over the Gunnuhver mud pools and surroundings.

Gunnuhver is named after a female ghost that is believed to haunt the area. Icelandic folktales say that she caused great disturbances to passers-by until a priest set a trap for her about 400 years ago and she fell into the spring.

Note: The mud is extremely hot and not safe to touch. Do not attempt to bathe in the pools here.

Valahnúkur cliff and the nearby shoreline’s natural beauty make it a popular tourist destination year-round. It has dramatic views, including the tall island Eldey about 15 km (9 miles) offshore, the last known breeding ground of the extinct bird known as the Great Auk. The last pair was killed there 1844. You may see a little statue there of a Great Auk. 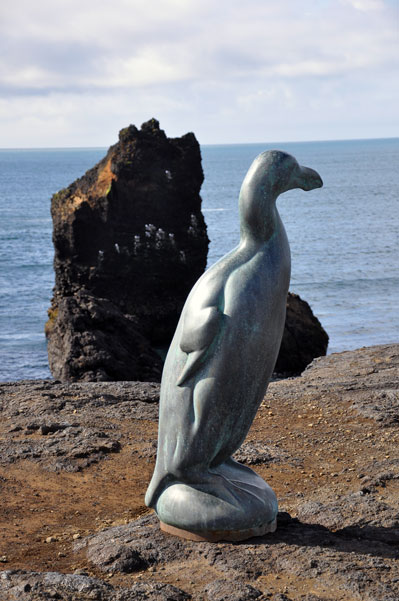 The waves break hard on these cliffs and parts of it break off regularly so take care and stay well away from the shoreline on windy days.

The first lighthouse in Iceland was built on Valahnúkur in Reykjanes in the year 1878. By 1905 earthquakes and surf had damaged Valahnúkur so much that there was the risk of the lighthouse falling into the sea. A new lighthouse was therefore built in 1907-1908 on Bæjarfell hill in Reykjanes and the old one was demolished with an explosion on April 16, 1908.

To get to Valahnúkur, take Route 425, and turn left just before the Reykjanes power plant. Drive past Gunnuhver hot springs to the Reykjanesviti lighthouse, and continue toward the ocean.

If you were to sail south from Valahnúkur you would not reach land until Antarctica. 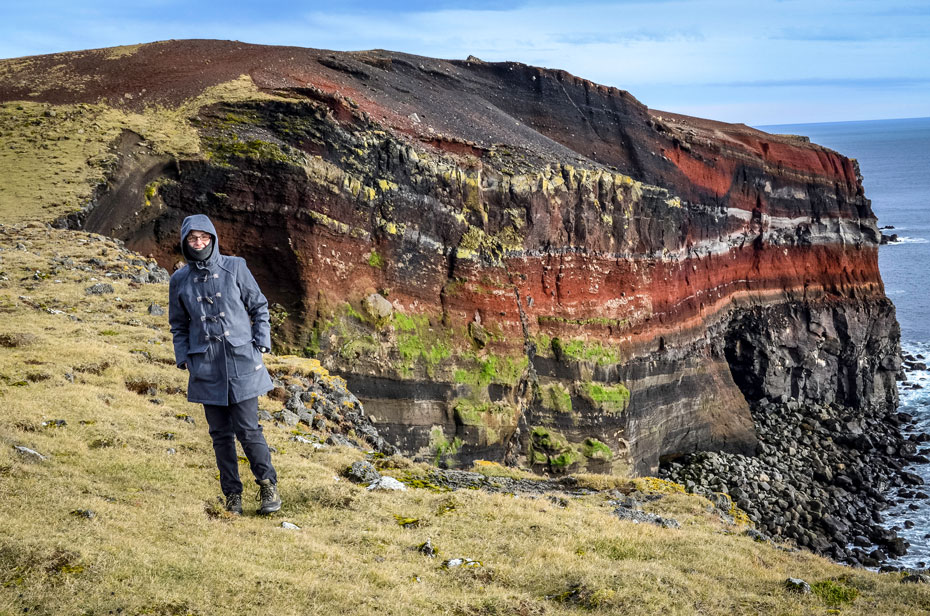 Krýsuvíkurbjarg, one of the great bird cliffs of Iceland in the Reykjanes Peninsula. In the summertime, the cliff is transformed into a multistoried avian city teeming with birdlife that has to be seen to be believed. About 58.000 bird couples lay their eggs there. People have collected bird eggs for food since the settlement of Iceland in the 9th century and kept the practice going until well into the modern era.

A boat stranded there in 1991 and another one in 1998, in both cases all lives were saved. 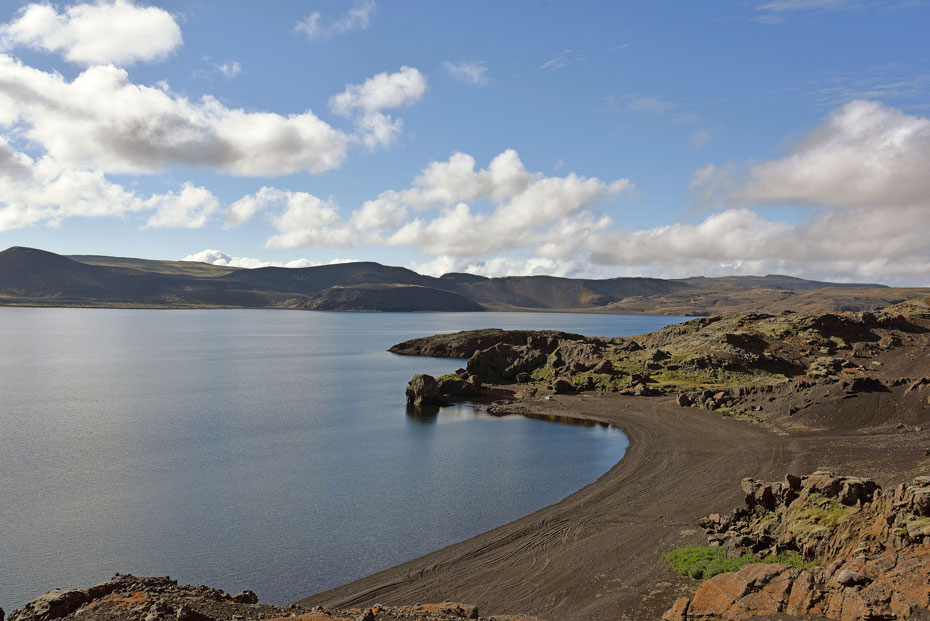 Lake Kleifarvatn is about 10 km². It is the largest body of water in Reykjanes peninsula and the third largest in southern Iceland. It is about 97 m (318 feet) deep and one of the deepest lakes in Iceland.

The beautiful volcanic surroundings make it a unique place for photographers.

According to a local legend a monster in the shape of a worm and the size of a medium-sized whale lives in the lake. (This is not to be confused with our other famous lake-dwelling beast,
the Lagarfljót Worm, who lives in the east). 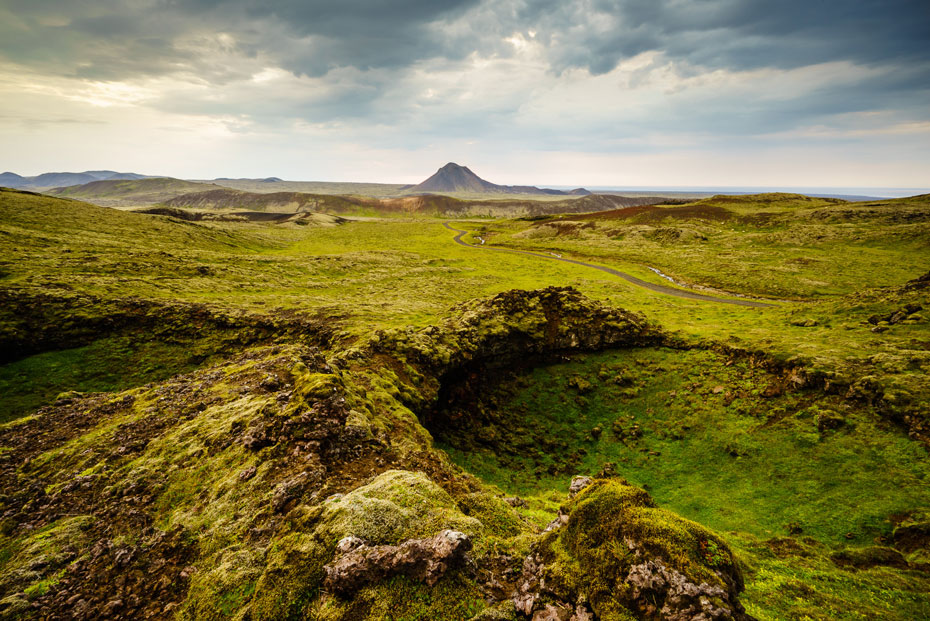 Keilir crater is the most distinctive landmark of Reykjanes and a symbol of the Reykjanes peninsula. In spite of its steep slopes, it is not too difficult to climb, and the view from the top on a clear day is amazing. Keilir is a hyaloclastite mountain that was created during subglacial eruptions during the ice age.

If you rent one of Lava Car Rental’s 4x4 car rentals, you can drive on Höskuldarvegur to a parking lot at Oddafell, and from there is a trail to Keilir. The trail is about 7 km (4.3 miles) and the hike to view the crater takes about 2-3 hours. 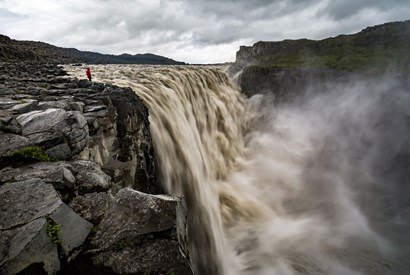